Back to Ben's main page.

Ben Sauter, a character, in his own words

An Incident during Flood Agnes 1972

I was working on the Glen Burnie Village Shopping Center at this time. I was stopped on the Beltway on the way to work at the Patapsco River. We could see the tops of cars sticking out of the water at the Brewery which was there at that time.

There was a low heavy metal divider between the inner and outer lanes of the beltway. So I sit there a little while and someone gets out of his vehicle with a huge wrench and he starts to unbolt the horizontal steel rail off the vertical posts.

Now a crowd has gathered around wanting to help. We quickly removed the long horizontal steel rail between 3 metal posts.

Now the rail has been removed but still not enough room for a car to cross because of this metal post right in the middle of the opening.

Just then a couple men came along with a burning torch. He soon had the post burned off at ground level.

We all got back in our vehicles and made U-turns, making sure we straddled the metal stump of the burned off post.

Now we are on the inner loop of the beltway heading home.

At home were 2 of my teenage kids, Sharon and Donald. Their school was closed.

They wanted to go out and see the sights. I did too. So off we went. We went to Hollofield first and saw where the bridge over the Patapsco was washed away. 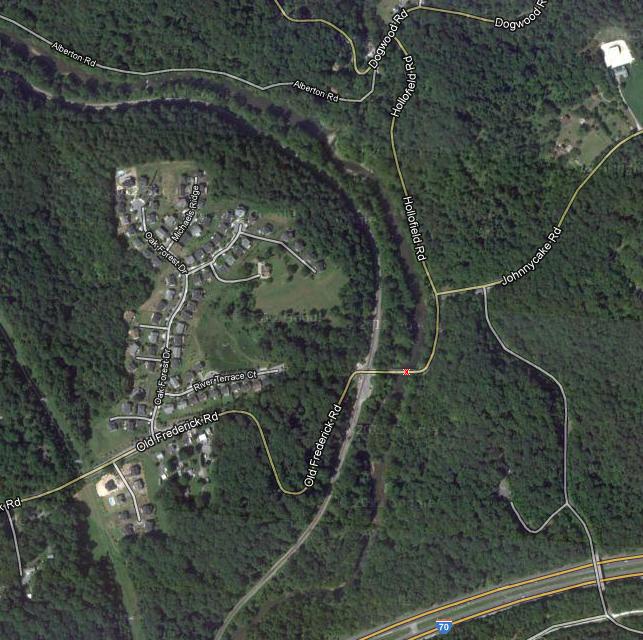 Bridge over the Patapsco washed away by Flood Agnes (red x marks the spot.)

We got on Liberty Rd heading toward Balto. We got about 2 blocks west of Essex Rd. and we saw that something big was happening ahead. So we parked our truck in the Lutheran church yard and got out and walked toward Essex Rd.

There was a policeman there directing traffic to turn right at Essex and go in front of the Woodmoor Shopping Center which is much higher ground. Then back again on Liberty Rd. As we got closer to Essex Rd. we could see the bridge over the Gwynns Falls on Essex Rd. was under water.

Some thing inside of me said: Benton, if you want to walk across that bridge while it's under water, you're going to have to do it now because you will never see it under water again.

It was a beautiful voice. Heard only by me.

Dear little Gwynn's Falls was now a roaring river. Sirens everywhere added to the din. On the other side where Essex and Queen Anne Rd. intersect, there were many people taking in the scene.

The Bridge over Gwynns Falls (red x marks the spot.)

I walked right past the cop. He didn't say a word. My kids stayed near Liberty Rd.

I got about half way across the bridge and saw an aluminum canoe coming down stream. I hollered to the kids: I'm getting me a canoe!

The kids called out: There's 2 people clinging to that canoe.

One young man was clinging to one side and one to the other. I called to the kids: I need help, come on out. Donald came out. I told him: You take the one on the left.

In spite of all the noise, my voice was like a sound I had never made before or after that. It was like a bullet from my mouth to their ears.

The canoe with its hangers on were coming fast. I hollered to my young man: Hang on to the canoe. I'll pull you and the canoe both out. But I got him half out and the canoe is standing straight up. But it was too much to pull. So I yelled: Let the canoe go. Then I had no trouble pulling him up.

The canoe stood straight up and was spinning round. Then it was sucked under. We never saw it again.

Standing there, we didn't know how to act. None of us had ever been in a setting like this before. We were ill at ease, no talking. Then the one I pulled on slapped me on the shoulder and said. God bless you. And they walked off.

We told Jane and the other children. We never talked about it; still ill at ease.

Then some years later Jane and I were at a party with about 6 other couples. They were all telling stories. And somehow I pulled myself together and told this story.

One couple at the party was amazed. They said: Now we know who pulled our neighbors' boys out of the flood!

Editor's note: I've recounted my memories of this incident elsewhere on this site. I remember my canoer being squeezed by the raging water between the canoe and the side of the bridge. I was afraid he was being crushed so at first I was trying with all my might to push the canoe back off of him. That was fruitless and my father yelled, "Pull him out!" Now I don't remember if I did that single-handedly; I'd bet that Pop stepped over and did the lion's share of the hauling there, too.

As far back as my memory takes me, I was always aware my father was a natural hero. Here's an example from maybe when I was 6 or so. The family occasionally went to a park in Braddock Heights, Maryland (just west of Frederick), which had a huge sliding board. Maybe it was 30 feet tall, but it seemed higher than the moon to us kids. At the bottom of the slide was maybe an 8 ft x 8 ft box of wood chips to land in. In a lull in the action on the sliding board a toddler found his way in the box and was playing in it, just as a child would in a sand box. But then a group of maybe 3 or 4 kids started hurtling down the slide - with the toddler right in their path! I can't remember who noticed first and raised the alarm, or even if anybody verbalized anything, but in a blink of an eye, Pop raced across the box, scooping up the toddler on the run, just a moment before the kids hit bottom. Just like Superman or Sky King would have done on the television. I remember the mother thanking Pop sincerely, but my memory also has it as another of those somewhat "ill at ease" situations. Maybe I'm projecting. There have been a few incidents in my life where I regret I was too embarrassed to jump in and be the hero. Has anyone studied this phenomenon, the embarrassment associated with heroism?